Tasty tacos, vinyl records and a social club – those are all the makings of a pretty rad taco shop. At least, that’s what owner Kirk Keupp and his partners thought when they opened Vinyl Taco. What started as a small taco shop in Fargo, ND, soon expanded to Grand Forks, ND, then to Sioux Falls, SD, along with the Vinyl Social Club – and from Keupp’s experience, there was only one choice for a business cable TV, internet and phone service provider.

“As long as we’ve had restaurants and bars in Sioux Falls, we’ve been a Midco® customer,” said Keupp. “That goes back 20, probably 30 years now that we’ve had Midco cable television. Then, as products were added, we added. We currently have the high-speed internet and the phone system.”

TV entertainment is a cornerstone of Vinyl Taco’s offerings. That includes the TVs behind the bars and hosting watch parties for big games in the social club. Their customers enjoy coming in, watching what they want, and munching on custom tacos and enchiladas – all at the same time.

“We’ve had people come in and ask us if a certain game was on TV or if there was a certain program on TV,” said Keupp. “We’re constantly using some of the sports channels and news channels that Midco offers.”

Having local sports channels available is a big draw, too, especially for alumni in the area who want to catch their team play.

Midco Sports is available in standard and HD as a part of Midco’s basic TV package in most areas. It airs high school and collegiate games, plus original sports programming.

Rain, wind, snow – Midco’s cable TV service isn’t affected by the weather, which is key for keeping customers in the door.

“I don’t know what it would be like to have satellite service, but I’ve certainly been at people’s houses before that have had satellite services. If it’s raining too hard or if it’s snowing hard, we’re not watching TV because they’re not getting any feed,” said Keupp.

According to Keupp, if people are at your establishment to watch sports, then they’re there to watch the game from start to finish. If there’s an interruption in service or if your streaming cuts out, those customers are going to go someplace else to finish the game. 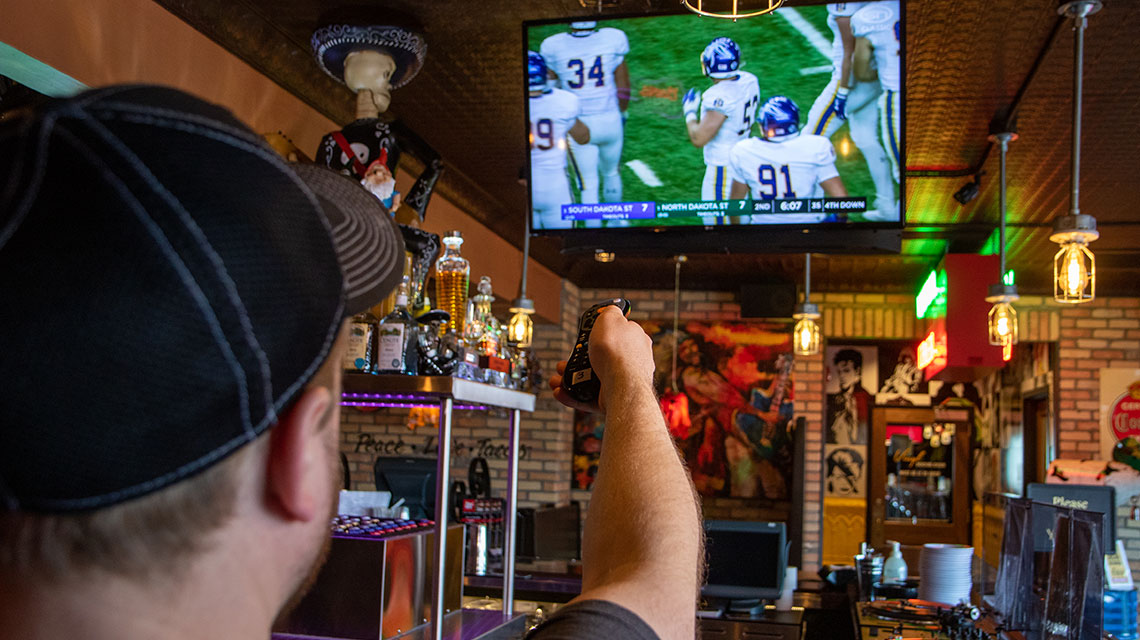 Vinyl Taco also partners with Midco Business for internet and phone services, as well as advertising creation and placements. Altogether, the full suite of services allows them to connect point-of-sale systems, accept carryout orders and promote the restaurant.

“The big thing is the internet – it’s what allows us to work every day,” said Keupp. “So much of the property is controlled by the internet. And every day it seems like there are more and more things that we need to rely on the internet for – from credit card transactions to just daily business on the computers.”

Whether it’s in Sioux Falls, Fargo or Grand Forks, Vinyl Taco’s Midco services come with local representatives to help grow, troubleshoot and support them when they need it.

“For me, it was that they are local – and that was important to me, to have a local provider,” said Keupp. “Just thinking about any problem that we may have – it could be handled somewhat locally here. I’ve had Midco cable television since the beginning and truly have not had many issues over the years with the product. All those things factored into the decision of using their product, with having local contacts and reliability being the two biggest factors.”

Having dependable TV services keeps your customers captivated. Make your establishment the place to be during their favorite games.

Learn how Midco Business internet, cable TV, phone and advertising services can help your organization focus on its goals. Reach out to a Midco Business sales representative today.