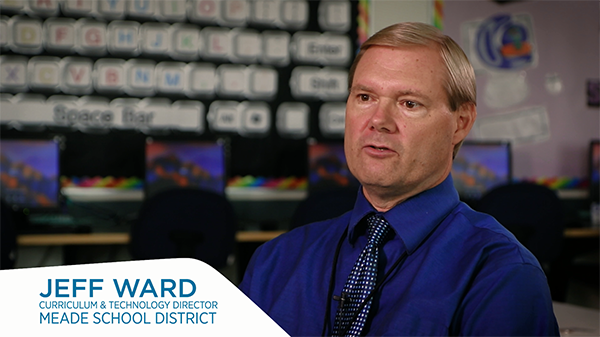 The Meade School District is geographically the largest in South Dakota. Stretching east to border the vast grasslands of the Cheyenne River Reservation and west into the Black Hills, it covers a staggering 3,000+ square miles. The district’s largest population center is the city of Sturgis, where Midco® has provided point-to-point fiber internet to many schools for several years.

A school district of that size presents some unique connectivity challenges, says Jeff Ward, the district’s Curriculum and Technology Director. Advancing technology has certainly helped keep the district connected across the miles – using Skype and similar face-to-face technology on iPads and computers – but it all takes dependable bandwidth. That’s why the district decided to partner with Midco.

“I was impressed by the sales team with Midco from the beginning. I liked the ideas and options that were provided to us,” says Ward, who was equally pleased with the attention he received throughout implementation.

“When we decided to go with Midco, I felt that the site survey team that came out worked closely with me and my team to help make sure we were going to get what we needed in the district. Then after that, the technicians who came to install were very good to work with – as far as talking with us to ensure we knew they were working in the district,” remembers Ward.

Keeping district classrooms on the same page – interacting with one another, with off-site and virtual speakers, and other educational resources – is critical to the Meade School District’s teachers and students. Increasingly, connected classrooms help level the playing field for students in rural districts, which makes the internet service Midco provides imperative to the Meade School District’s success.

“I would say today on a scale of one to 10, I’d put it at an 8 or 9,” says Ward. “I think it’s very important to our teachers trying to access content. There’s a lot of online testing that we do now. And along with that, you can get to the Smithsonian and look at primary artifacts – things that we just couldn’t do before technology. We still believe in direct instruction, but it sure opens a lot more opportunities with the devices.”

In his time with the district, Ward has seen bandwidth use grow tremendously. He knows that will only increase.

“As we put more devices in our district, and demands for connectivity increase, Midco’s been a good partner for that – to situate us so that we can move forward and be successful in the implementation of those devices. And hopefully, put us out in front as a leader in our area as a school district.”

In addition to high-speed broadband internet service, Midco began connecting much of the Meade School District with SIP phone service in 2017. Now, rather than tying up phone lines with intra-district phone calls, staff members dial four digits to reach one another by voice or video. Ward says the SIP service has helped cut costs, among the perennial drivers of decisions in many school districts.

Ward adds that he appreciates Midco’s flexibility as the district’s needs evolve. In launching the new service, he did a lot of planning with Midco and visiting with other school districts to estimate how many SIP lines the Meade School District needed coming into its buildings.

“Same thing with our broadband – I know that I can call if all of a sudden we’re needing more bandwidth – and this has happened in our district for whatever reason. As long as we have the funding to support that, I know I can call, and Midco is willing to ratchet up the amount of bandwidth we’re getting on any given day. That’s one thing I’ve been impressed with Midco, too, is scalability,” he adds.

Although Midco has been able to answer many of the Meade School District’s connectivity needs, Ward hopes to see that partnership grow to cover all corners of the expansive district.

“Our rural schools sometimes get forgotten. There aren’t as many students out there, but they’re just as important,” he says. “And the teachers that are out there deserve to be able to put those tools in front of the students and be able to have that access, which means that we have to have access to the service before we can provide that to our students in our rural schools.”

Ward says he and his colleagues have noticed how Midco has increasingly expanded into rural and remote portions of its service area. That and Midco’s quality customer support are key reasons why he recommends Midco services to others.

“I think number one is the friendly service. I get a feeling – a true feeling from Midco – that they are there to help. They are very receptive, when we have problems, to help us troubleshoot issues. When I’ve called, whether it’s a technician in Sioux Falls or the sales team, they’re very responsive. I get answers quickly, and it’s helped us keep our technology where we want it to be.”

Interested in how Midco can help your business? Learn more about internet and networking options, or get in touch!