“When we first started in 2013 with Midco® advertising, we kind of thought our initial push would be HGTV, FX and things like that,” recalls Bednar.

So Bednar and his Midco advertising consultant went to work and developed a plan to produce commercials and advertise on cable TV. Shortly after Bednar’s ads started airing, his Midco consultant suggested an audience that Bednar hadn’t previously considered – regional sports fans.

“We didn’t really think we’d have anybody follow up with us,” Bednar admits. “But we got an immediate response right after our big push. In fact, it was such a good response that we decided to sponsor again the following year.”

Standing Out from the Crowd

Bednar and his staff pride themselves on selling quality products and having fun while they’re doing it.

“Our company is not so ‘white collared’ – we like to have fun,” says Bednar. After he shared his company culture with the Midco team, they developed a campaign and commercials that captured CU Mortgage Direct’s spirit.

“The production team came in, set up different shots and were very helpful. The commercials we produced with Midco are more on the fun side, and I think they caught a lot of attention,” says Bednar.

He likes to share a story of a time he was traveling on business in western South Dakota. As he sat and enjoyed his lunch in a restaurant, one of CU Mortgage Direct’s commercials appeared on TV.

“Everyone just stopped and turned around and watched our ad,” he recalls. “I thought, ‘we reached people way out here – even though they may not do immediate business with us, they know who we are. They’re going to catch on to who we are.’ And that was the whole point of us creating a partnership with Midco.”

Advertise during highly viewed sporting events, from national broadcasts to regional games on our very own Midco Sports Network®. Learn more about our sports advertising opportunities. 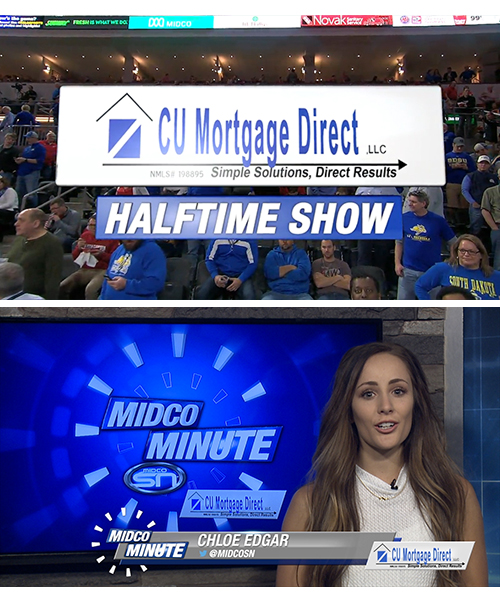 Bednar is confident that his business has earned new and repeat customers thanks to the attention-getting commercials and sponsorships on MidcoSN. He credits that in part to the Midco team’s flexibility and level of customer service.

“There have been situations where we’ve come up with different agreements based on our workflow and subsequent cash flow. We appreciate that,” says Bednar, who also values the Midco professionals who support his business. “Everyone we have come in contact with has just been top-notch.”

Over the years, CU Mortgage Direct’s relationship has evolved to include sponsorship of the Midco Sports Minute that airs on MidcoSN.

“It was big for us. We’ve gotten a great response. It’s been a solid investment,” says Bednar, who is committed to a long-term partnership with Midco.

“We believe in what’s happening here. We feel that even though we are not a ‘top dog’ in advertising dollars, we are treated like that. And that means a lot to us. Our future with Midco is definitely there,” adds Bednar.

Ready to create a commercial that will engage customers and win business? Find a consultant in your area through our online search, or request a consultation.

Find A Consultant  Request a Call