Nabbing those coveted concert tickets, advancing a work project, fielding a dinner request from your loved ones – it can all be done at your fingertips while strolling down Phillips Avenue in Sioux Falls. Thanks to a significant financial and technological investment by Midco, one of the region’s busiest hubs is wired with free Wi-Fi.

“Offering free Wi-Fi in downtown Sioux Falls was a no-brainer. That’s not to say this project didn’t present challenges, because it presented plenty,” said Midco CTO Jon Pederson. “But, we wanted Sioux Falls’ downtown streets and the people who visit its bustling core to have seamless connectivity.”

That means a solo entrepreneur can spend the morning working at Coffea’s patio, catch up on personal emails while walking down Phillips and set her fantasy football lineup while snagging a table outside M.B. Haskett. 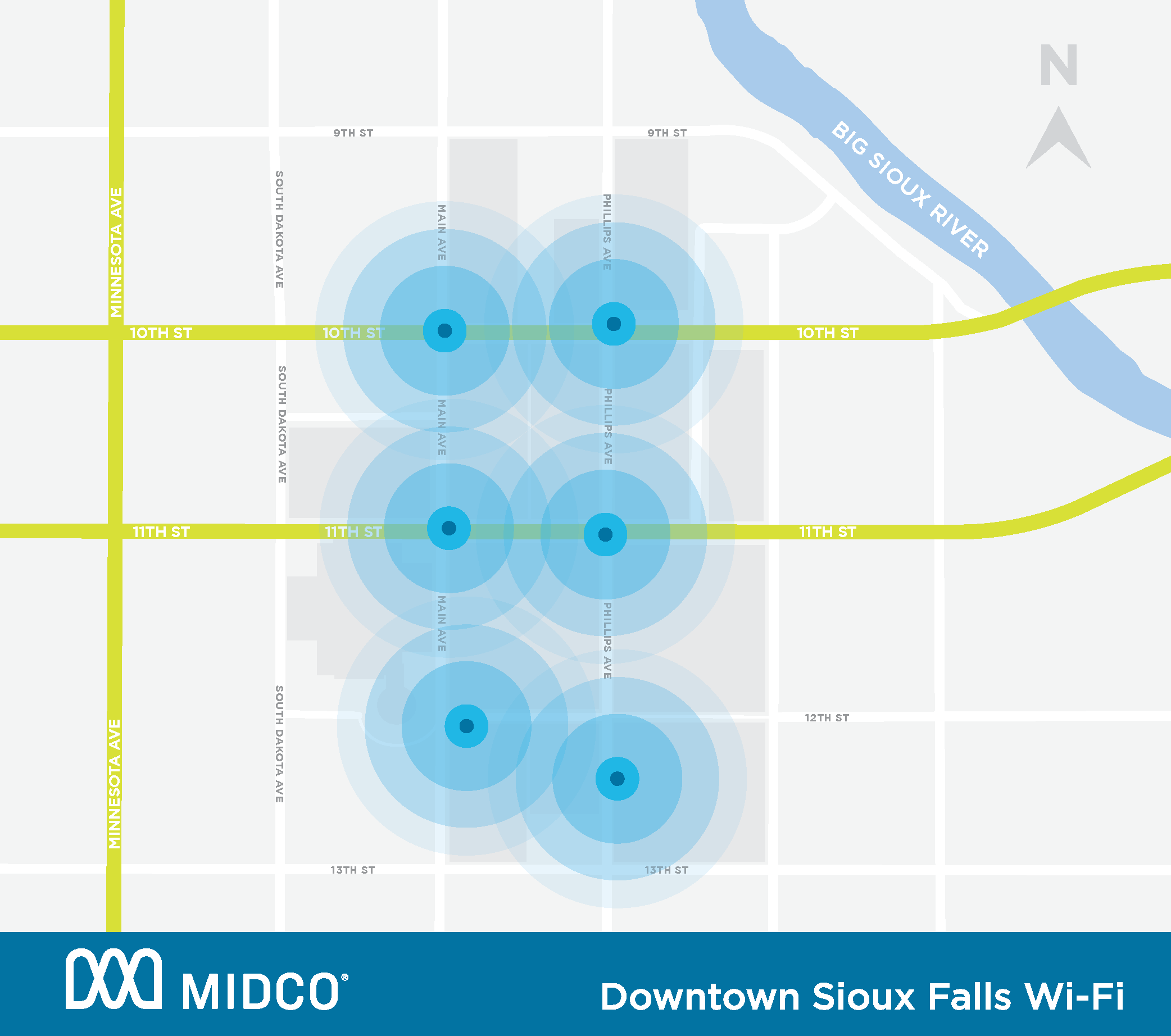 Looking Ahead to Fargo Downtown Wi-Fi

The same concept is on the horizon in downtown Fargo, where Midco is beginning an investment to deploy wireless connectivity. Equipment has been ordered for 11 connectivity points along Broadway and Roberts Alley. Midco is working with the City of Fargo to place two of the access points on traffic signals. We expect to complete installation and have Wi-Fi connectivity online by the end of November. 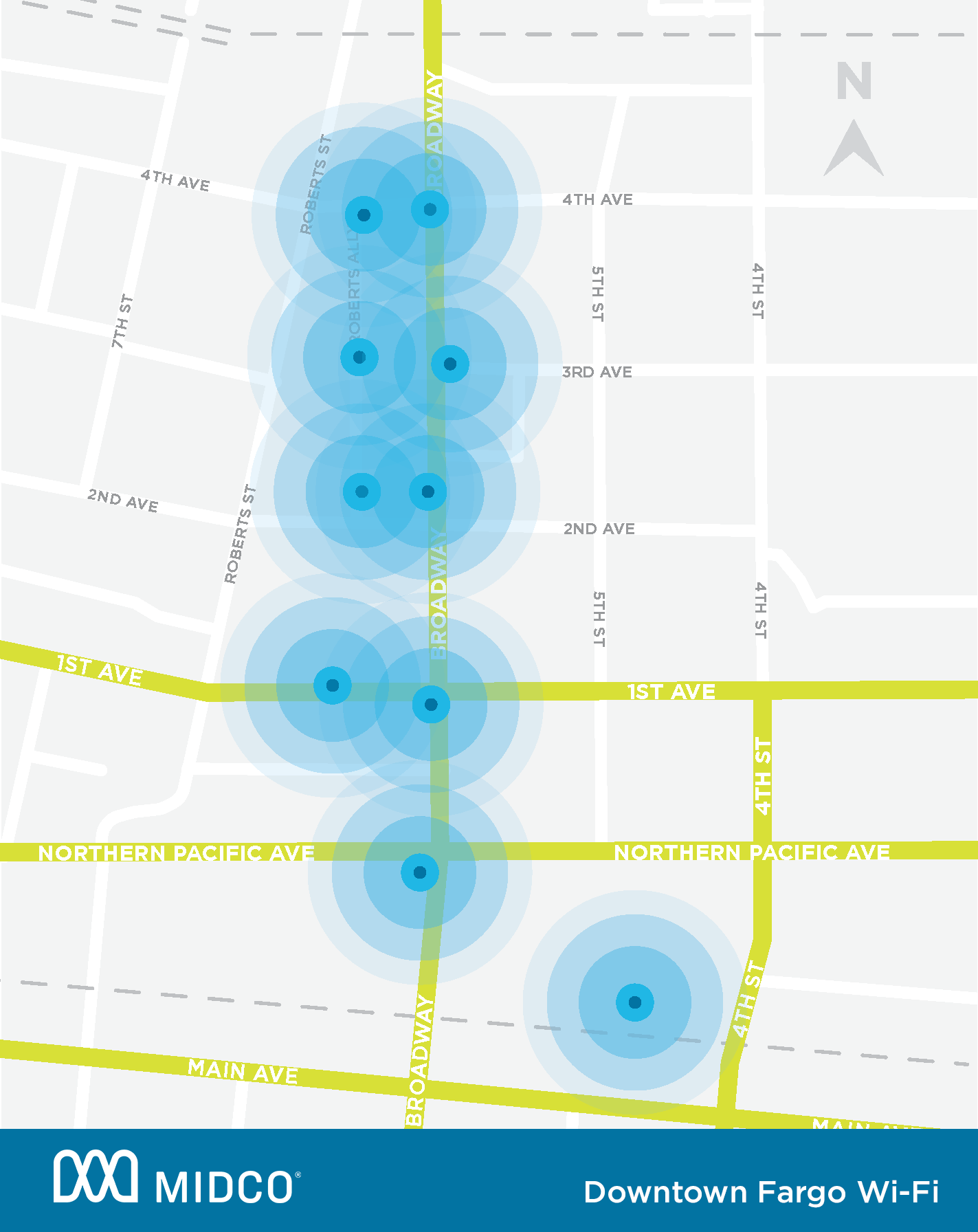 Nestled on Broadway in downtown Fargo is the Prairie Den. Affectionately known as “the Den,” the coworking space is the home of developers, artists and accountants just to name a few. Coworking is the essence of collaboration, a place where solo entrepreneurs and two-person shops bounce ideas off each other without having to pick up the phone or schedule a meeting.

Noticing the success of the coworking model, Midco partnered with The 701 in Grand Forks, a collaborative space for independent professionals supported by Evolve Grand Forks. By providing The 701 and professionals with Midco Xstream® Gig services, entrepreneurs are on the fast track to success.

“When an entrepreneur works at The 701, they’ll find a vibrant office space that supports creativity and collaboration with super-fast connectivity,” says Brandon Baumbach, Evolve Grand Forks board member. “When a person bumps into someone with a different background, new experiences take place which just may lead to the next big idea.”

Coworking was once seen as a non-traditional workplace, but it’s becoming the norm. Today’s workers crave ultimate flexibility – working when and where they want.

Listening to customers and leading the forefront of innovative technology have long been Midco’s priorities. From offering free Wi-Fi in downtown Sioux Falls now and Fargo in the future to providing gigabit internet to a coworking space in Grand Forks, Midco is proud to be leading the seamless connectivity experience.

With Midco, you get more than a high-speed internet connection. We also provide around-the-clock support and service level commitments. You can count on Midco to be responsive to your needs.